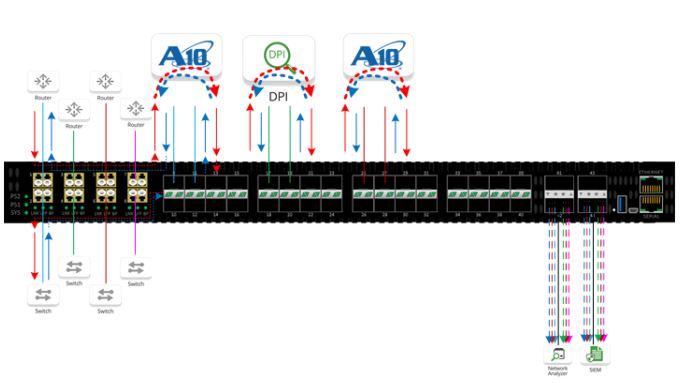 When trying to support network continuity, mitigating the risk of scheduled or unscheduled downtime is an issue for any operation. The need for a secure layer to identify and actively block hidden threats can be difficult and costly, especially while also keeping your network resilient. Deploying inline appliances on mission-critical network segments requires active-passive flows to decrypt data for network security.

For a single source deployment, traffic is sent from the router through the A10 Networks’ Thunder SSLi CFW 5840 for data decryption. The decrypted traffic is directed back to the Garland Technology EdgeSafe™ Network Bypass TAP, exiting the daisy-chained network port to the next bypass segment.

Once the network data is sent through the DPI and into a second network port, the traffic travels through the second A10 device for re-encryption. The simplicity of this connection allows a single point of decryption throughout the network to eliminate blind spots, ensuring compliance and privacy.

When deploying in multiple networks, traffic from each network link is brought into the Edgelens® inline security packet broker and VLAN tagged. Once tagged, the traffic is aggregated and load-balanced through the two A10 Thunder SSLi devices. The data is decrypted and routed to the DPI appliances in reverse order back to the A10 devices for re-encryption. This seamless integration throughout your infrastructure allows comprehensive, real-time and actionable insights with application-level visibility.

The joint solution provides visibility to all security devices, including inline, out-of-band and ICAP- enabled devices. Together, A10 Networks and Garland Technology detect advanced threats with low impact and load-balance to distribute traffic across multiple networks.

A10 Networks believes the future of cyber security for 5G and multi-cloud rests on Intelligent Automation coupled with machine learning, ensuring that business critical applications are protected, reliable, and always available.

A10 Networks provides Reliable Security Always™, with a range of high-performance application networking solutions that help organizations ensure that their data center applications and networks remain highly available, accelerated and secure. Founded in 2004, A10 Networks is based in San Jose, Calif., and serves customers globally with offices worldwide. For more information, visit: www.a10networks.com and @A10Networks.

This blog was originally published on Garland Technology’s website.  It has been used here with permission from the provider.