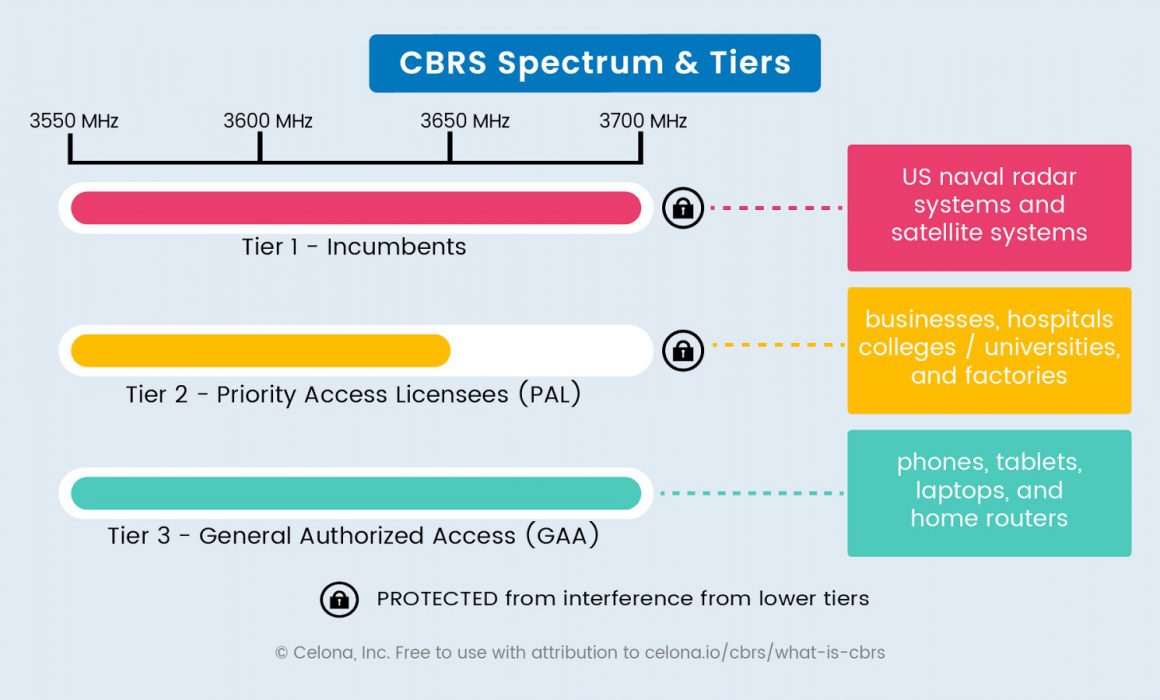 So what is CBRS? Citizens Broadband Radio Service is a band (band 48) of radio frequency spectra from 3.5 GHz to 3.7 GHz for 3 types of users:

Originally, this band was reserved for use by the U.S Department of Defense, namely for U.S. Navy radar systems. But in 2015, the Federal Communications Commission (FCC) dubbed the 3.5 GHz band as the “innovation band” to be opened up to new mobile users.

Since then, the “innovation band” has evolved into what is now known as CBRS. CBRS opens up a major opportunity to unlicensed users and enterprise organizations who want to use 5G, LTE, or even 3GPP spectra to establish their own private mobile networks.

A strong coalition of companies — including Google, Qualcomm, Intel, Federated Wireless — have banded together to form the OnGo Alliance to support CBRS implementers and adopters develop, commercialize, and adopt LTE solutions for CBRS. The OnGo Alliance develops “OnGo” technology, specifications, and certifications to ensure interoperability of network components.

Similar to how the internet was opened up to the public during the Dot Com Bubble, CBRS now gives any business the ability to create services and run applications on private 4G LTE and 5G wireless networks that could sprout entirely new industries.

CBRS Band 48 is a total of 150MHz of spectrum ranging from 3.55 to 3.7 GHz. CBRS can be used for 4G LTE or for fixed or mobile 5G NR. The entire system relies on a series of CBRS standards that were developed by over 300 engineers and 60 different organizations in conjunction with the FCC.

These standards consist of security measures, licensing details, and what protocols are used to communicate with devices. Certification programs were developed to help establish standards for installing proper CBRS deployments that follow the proper guidelines in identifying itself, as well as communicating with the necessary FCC databases for operation.

‍What is the CBRS architecture? What are the components of CBRS?

The CBSD also identifies its unique geolocation, height, indoor or outdoor status, and unique call sign registered with the FCC. The CBSD and SAS communicate through Hypertext Transfer Protocol Secure (HTTPS), with each message encoded via JavaScript Object Notation (JSON).

To prevent interference across the three tiers, the SAS acts as a frequency coordinator that prioritizes access between the Incumbent, Priority Access, and General Access tiers. This system can work in tandem with Environmental Sensing Capability (ESC) which relays important information regarding spectrum use from the Department of Defense.

CBRS is “lightly licensed” since it’s either licensed or unlicensed depending on the user’s tier. CBRS lays out three tiers of users.

The first tier is for Incumbents. This includes US Navy radar systems who will always get first-priority use that operate in the 3550-3700 MHz band. To protect this space there are a number of Coastal Exclusion Zones that surround nearly all of the US coastline. This is to ensure naval vessels can still communicate with shipyards without interference.

There are also Protection Zones located inland that protect the airways around fixed satellite space to earth radars in the 3600-3650 MHz band. This portion of the spectrum is protected against interference from Priority Access Licensees and General Authorized Access users.

While these exclusion zones cover a large portion of the coastline, private organizations still have plenty of spectrum to operate on.

The second tier is for Priority Access Licensees (PAL). PAL licenses are awarded to the highest bidders and allow coverage on a county-by-county basis. A single PAL license covers a 10 megahertz channel within the 3550-3650 MHz band, and are assigned in 10 year renewable blocks. PALs must accept interference from Incumbent Access users but are provided protection from interference from the General Authorized Access.

Lastly, the third tier is for General Authorized Access (GAA). These are unlicensed users who are last in line to use the spectrum across the 3550-3700 MHz band. While this tier is the most open, it has no expectation of protection from interference from any other tier, or other GAA users.

Is CBRS exclusive to the United States?

CBRS specifically is based in the United States, but other countries such as Germany, Brazil, Japan, UK and others are expected to follow suit with their own division and auctions of the C-band. While the precise spectrum allocations may be different than CBRS, it will allow for the same privatization of radio services to the public.

‍Why does CBRS matter to your organization?

CBRS enables enterprise organizations to build their own private LTE or 5G networks, both of which offer an “express lane” of wireless connectivity to critical enterprise applications that require wider coverage, interference-free wireless spectrum and guaranteed service level agreement (SLAs) for network performance metrics such as latency and throughput.

There are a number of CBRS LTE benefits. Here are just the most prominent:

While smaller businesses may not see the impact that CBRS brings to business applications, large enterprises can leverage this new technology to scale their digital automation initiatives as they invest in new generation of use cases – computer vision sensors, automated mobile robots (AMR), voice and video communication tools – that require real-time compute.

In situations where reliability is just as important as speed, the CBRS spectrum lays the groundwork for powerful technologies like 5G enabled radios. CBRS is a giant leap forward for certain industries that are currently underserved by traditional enterprise wireless.

Here are just a few use cases for CBRS.

Hospitals & Healthcare Clinics. 5G enabled defibulators, insulin pumps, crash carts, and other medical equipment can reliably share real time information about it’s status and location no matter where it is on campus.

Mines. Mining operations can use private LTE built on the back of CBRS to share real time information with other sites, and even send commands to robotic machines deep underground from miles away. IoT sensors strategically placed on mining equipment allows for preventative maintenance and lifecycle management, while those same sensors can be used to help track the health, safety, and location of workers deep underground.

Industrial Internet of Things & Manufacturing. IIoT relies on the interconnectivity of all aspects of the supply chain to maximize efficiency, improve workflow, and lower the overall manufacturing cost. IoT sensors can help keep maintenance technicians proactive by alerting to potential problems before they cause downtime and impact the factory floor. For example, oil levels can be monitored and be set to automatically create a work order ticket when it needs to be changed.

Warehouses. CBRS helps pick up where Wi-Fi struggles in large multi-building warehouses. 5G signals can easily blanket multiple warehouse centers allowing them to operate on the same network and share information cohesively. Small reusable sensors can be attached to pallets, shipping containers, or individual items to help track inventory in real time. Automation can be configured to send alerts to a manager when inventory is low, or if more space might be needed for that particular item.

Skyscrapers & Large Complexes. Much like office parks, skyscrapers struggle with similar issues when it comes to reliable connectivity that is often patched together through a mesh of Wi-Fi bridges, access points, and cable drops. CBRS can unify a network and create a single point of access for wireless devices. Even in a multi-tenant building with dozens of other Wi-Fi networks, CBRS will be able to communicate with no interference because it operates on a completely different band.

Event Venues. Venues will benefit from many of the same features that sport stadiums do, just on a smaller scale. Large outdoor venues will be able to broadcast LTE from the stage, all the way out to remote fields where wired infrastructure cannot reach.

Hotels & Hospitality. Hotels and resorts often struggle with sluggish wireless connections and dead zones that result in guests complaining and leaving negative reviews. A CBRS network is in a unique position to help both staff and guests stay connected.

Airports & Public Transportation. Airports can confidently supply a blanketed signal from the tarmac to the terminals with confidence in the reliability, interference-free operation and security of the network.

How does CBRS shape the future of 5G?

With 5G being on everyone’s mind, CBRS spectrum is often overlooked. It will truly carry this standard beyond the reaches of consumer based services and well into the enterprise footprint. With wireless speeds approaching and oftentimes exceeding wired networks, CBRS will lay the foundation for new service providers and accelerate digital automation initiatives in the enterprise.

Even if 5G isn’t quite as prevalent across the country now, businesses that invest in private LTE infrastructure will position themselves to be able to quickly upgrade their cellular network with 5G capabilities when the access point and mobile / IoT devices are ready. Even as new generations of technology standards are developed over time, they will likely utilize the CBRS spectrum, and give tech-savvy companies a leg up on their competition.

How Can Celona Help Develop Your CBRS Network?

Celona helps businesses deploy private mobile networks by fully automating the deployments of CBRS deployments and offering a turnkey solution with its hardware and software components. To estimate the number of CBRS access points for your facility indoors and outdoors, try our free network planner. And to give it a try in your environment, request a product trial.

This blog was originally published on Celona’s website.  It has been used here with permission from the provider.